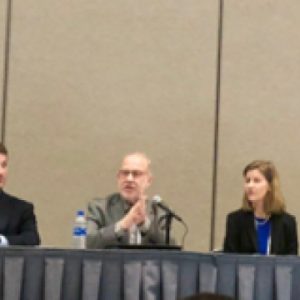 Last week, Global Genes, a global rare disease patient advocacy organization, announced the 2019 RARE Champion of Hope Awardees, which included Hyman, Phelps & McNamara, P.C.’s very own, James Valentine.  This is a great honor, bestowed upon “true champions for rare disease”, “people who inspire us all through innovation, research, compassion and a relentless spirit to affect positive change.”  It is no surprise to me, someone who works with James on a daily basis, that he would be selected for such an honor.

James has been a relentless advocate for rare disease patients from the day he started his career, as a patient liaison at FDA, over 11 years ago.  At FDA, James worked across the Agency’s three medical product centers to help incorporate the patient voice into regulatory decision-making.  He helped administer the FDA Patient Representative Program, facilitated stakeholder consultations during the reauthorization of PDUFA and MDUFA, helped launch the Patient-Focused Drug Development (PFDD) program, and developed the FDA Patient Network.

Since joining HP&M 5 years ago, James brought his advocacy skills to private practice, representing over two dozen rare disease patient advocacy groups, assisting them in engaging with drug developers and regulators.  He’s been central to the transition of the PFDD program to externally-led meetings, having helped plan and moderated the majority of these, and is also working on novel methodologies for capturing patient experience data.  He has helped ensure thousands of patients have a seat at the table with decision-makers. And his patient advocacy work is only the beginning.  James has also been critical in advising orphan drug and gene therapy sponsors in development and approval issues, having helped secure FDA approval for several new molecular entities in this relatively short period of time.