HHS Proposes Longer Delays to Implementation of the 340B Final Rule 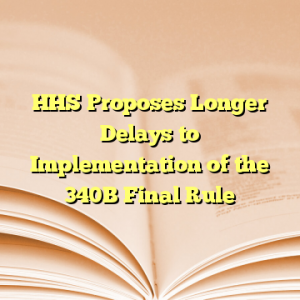 By David C. Gibbons & Alan M. Kirschenbaum –
On August 21, 2017, the Health Resources and Services Administration (“HRSA”), the federal agency responsible for overseeing the 340B Drug Discount Program, published in the Federal Register a Notice of Proposed Rulemaking (“NPRM”) that would delay until July 1, 2018 the implementation of the Final Rule establishing the methodology for calculating the 340B ceiling price (including the so-called penny pricing policy) and civil monetary penalties (“CMPs”) for knowing and intentional overcharges of 340B covered entities (see our original post regarding the Final Rule here).
Similar to the reason given for previous delays (see our posts here and here), HRSA indicated that this latest delay to mid-2018 will “allow for necessary time to more fully consider the substantial questions of fact, law, and policy raised by the rule.” 82 Fed. Reg. 39,554.  The impetus for HRSA’s delay to the effective date of the Final Rule expressly derives from both the “Regulatory Freeze Pending Review” memorandum issued by the Trump administration on January 20, 2017 as well as the Executive Order issued the same day entitled, “Minimizing the Economic Burden of the Patient Protection and Affordable Care Act [(‘ACA’)] Pending Repeal.”  See our post here that described the Regulatory Freeze memorandum.  The Regulatory Freeze memorandum provided time for the Trump administration to review and reconsider regulations implemented during the Obama administration.  The Executive Order directed Trump appointees, including the heads of the U.S. Department of Health and Human Services (“HHS”) and other executive offices to “utilize all authority and discretion available to delay the implementation of certain provisions or requirements of the [ACA].” Id.  The ACA required HHS to improve aspects of 340B program integrity with a statutory mandate to develop a system to enable HHS to verify the accuracy of ceiling prices calculated and reported by manufacturers, including the implementation of “precisely defined standards and methodology for the calculation of ceiling prices,” and to impose CMPs for manufacturer overcharges to covered entities.  42 U.S.C. § 256b(d)(1)(B)(i)(I), (vi).  The 340B Final Rule was HRSA’s long-overdue rulemaking aimed at implementing those ACA provisions.  Despite unsuccessful attempts by Congress to repeal and replace the ACA since that Executive Order was issued, the Executive Order appears, nevertheless, to continue to affect certain rulemaking implementing the ACA, including this 340B Final Rule.
Unlike the previous delays, this one raises the possibility that substantive changes may be made to the Final Rule. This NPRM states that, more than merely delaying implementation, HRSA “intends to engage in additional rulemaking on these issues” and will take additional time to consider a “more deliberate rulemaking process.”  As a further signal that regulatory changes may be forthcoming, HRSA stated that the agency did not want manufacturers to invest time and expense coming into compliance with a Final Rule “that is under further consideration and for which substantive questions have been raised . . . .” Id.  However, the NPRM contains no information on what substantive questions have been raised or what the new rulemaking would entail.
Public comments on the delay to the effective date of the Final Rule are also being solicited by HRSA in this NPRM. They are due to the agency on or before September 20, 2017.
We will continue to track and report on further developments regarding implementation of the Final Rule or other updates concerning the 340B Drug Pricing Program.