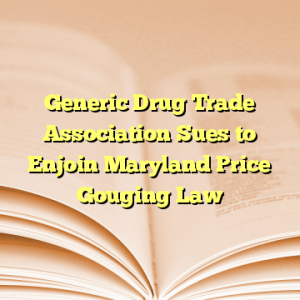 By David C. Gibbons –
We previously blogged (here) about Maryland’s law prohibiting “price gouging” by generic pharmaceutical manufacturers.  That bill, H.B. 631 (437th Gen. Assemb., Reg. Sess. (Md. 2017)) (hereinafter, “HB 631”), was passed by the Maryland General Assembly on April 20, 2017 and Maryland Governor Larry Hogan stated, on May 26, that he would allow the bill to become law without his signature.  HB 631 takes effect on October 1, 2017, unless it is struck down by the courts.  To that end, the Association for Accessible Medicines (“AAM”), the generic drug manufacturers’ trade association, filed suit on July 6, 2017, seeking declaratory and injunctive relief against the implementation and enforcement of HB 631. Ass’n for Accessible Meds. v. Frosh, No. 1:17-cv-1860 (D. Md. July 6, 2017).
In summary, HB 631 aims to limit generic drug pricing in two ways. First, it prohibits a generic drug manufacturer or wholesale distributor from making unconscionable increases in the price of an “essential off-patent or generic drug.”  HB 631 defines an “unconscionable increase” as “an increase in the price of a prescription drug that:

(1) is excessive and not justified by the cost of producing the drug or the cost of appropriate expansion of access to the drug to promote public health; and
(2)  results in consumers for whom the drug has been prescribed having no meaningful choice about whether to purchase the drug at an excessive price because of:
(I.)the importance of the drug to their health; and
(II.)insufficient competition in the market for the drug.”

Second, HB 631 authorizes the Maryland Medical Assistance Program (“MMAP”) to notify the Maryland Attorney General (“AG”) of a price increase when the Wholesale Acquisition Cost (“WAC”) of a prescription drug increases by at least 50% from the WAC within the preceding one-year period or when the price paid by MMAP would increase by at least 50% from the WAC within the preceding one-year period and the WAC for either a 30-day supply or a full course of treatment exceeds $80.
HB 631 also arms the AG with civil remedies for violations of the above provisions, including injunctive and monetary relief as well as civil penalties.
AAM’s complaint challenges HB 631 on two constitutional grounds. First, AAM alleges that HB 631 violates the dormant Commerce Clause of the Federal Constitution because it regulates commerce wholly outside of Maryland.  Compl. at 2, 23-27, Ass’n for Accessible Meds. v. Frosh, No. 1:17-cv-1860 (D. Md. July 6, 2017).  The Commerce Clause empowers Congress to regulate commerce “among the several states,” and thereby prohibits states from discriminating against or unduly burdening interstate commerce.  U.S. Const. art. I, § 8, cl. 3; see, e.g., Philadelphia v. New Jersey, 437 U.S. 617, 623-624 (1978).  AAM argues that HB 631 violates the dormant Commerce Clause by targeting transactions between pharmaceutical manufacturers and wholesale distributors or retail pharmacy chains with centralized warehouses, none of which are within Maryland.  Furthermore, the transactions themselves, including pricing determinations, are made on a national basis and do not take place within the State of Maryland.  AAM states that “next to none of the largest generic drug manufacturers . . . reside in Maryland, so the only involvement a manufacturer has in the overwhelming majority of off-patent and generic prescription drug sales in Maryland is via an upstream sale that occurred entirely outside of the state.”  Compl. at 2.  AAM goes on to argue that price restraints imposed by Maryland would “inevitably affect commercial transactions, pricing, and commerce in other states.” Id. at 13.
To illustrate its point on this issue, AAM provides an example of the extra-territorial reach of HB 631. In the example, a New Jersey-based generic drug manufacturer that has no operations in Maryland sells a product otherwise subject to the provisions of HB 631 to a wholesaler in Pennsylvania, which also has no operations in Maryland.  The wholesaler then sells the product to a local pharmacy in Maryland where an intra-state sale from the pharmacy to the patient is made.  If the intra-state sale results in an excessive price paid by the patient, HB 631 authorizes the AG to seek civil remedies for the violation from the manufacturer (and/or the wholesaler, unless the wholesaler’s excessive price was attributable to the costs imposed by the manufacturer).  According to AAM, in this chain of transactions, HB 631 regulates “every transaction outside of Maryland, but does not govern the primary transaction inside its borders.”  Mem. of Law in Supp. Pl.’s Mot. Prelim. Inj. at 29-30, Ass’n for Accessible Meds. v. Frosh, No. 1:17-cv-1860 (D. Md. July 6, 2017).
Second, AAM argues that HB 631 is impermissibly vague and, therefore, violates the Fourteenth Amendment Due Process Clause. See U.S. Const. amend. XIV, § 1.  Due Process requires that laws must be drafted to provide the average person a reasonable opportunity to understand what the law says and, importantly, what conduct the law proscribes.  HB 631 prohibits price gouging, which is an “unconscionable increase” in the price of such prescriptions drugs.  HB 631 defines this term as a price increase that is “excessive and not justified” by the manufacturing cost or costs associated with expanding access to the drug for the purpose of promoting public health, and which results in patients having “no meaningful choice” as to whether or not to purchase the drug because of its importance to their individual health and insufficient market competition.  AAM argues that HB 631 does not provide any guidance on how these terms should be interpreted or applied.  Specifically, AAM states in its complaint, “[m]anufacturers and distributors have no way to determine whether a given price is ‘excessive,’ whether a given market expansion is ‘appropriate,’ or whether a given consumer’s option set is ‘meaningful.’”  Compl. at 28.  Given that these terms have not been defined in HB 631 and cannot be reasonably interpreted absent additional guidance from the legislature, AAM contends that HB 631, as drafted, fails to provide requisite fair notice to those subject to its prohibitions, in violation of the Fourteenth Amendment’s Due Process requirements.
A similar Commerce Clause challenge was successfully litigated, by the Pharmaceutical Research and Manufacturers of America (“PhRMA”), in a lawsuit brought in federal court against the District of Columbia. In this case, PhRMA sought to enjoin the District of Columbia from enforcing a law that made it unlawful for a pharmaceutical manufacturer to sell a patented prescription drug for an “excessive price.” PhRMA v. District of Columbia, 406 F. Supp. 2d 56, 60 (D.D.C. 2005), aff’d sub nom. Biotechnology Indus. Org. v. District of Columbia, 496 F.3d 1362 (Fed. Cir. 2007).  The district court held that the D.C. law was per se invalid because of, among other things, its “extraterritorial reach in violation of the Commerce Clause as applied to transactions between manufacturers and wholesalers that occur wholly out of state.” Id. at 68.  On appeal the District of Columbia did not challenge the district court’s decision on the Commerce Clause issue, but the Court of Appeals upheld the district court’s decision on other grounds. Biotechnology Indus. Org., 496 F.3d at 1366, 1374.We will continue to monitor the Maryland case and provide updates as it progresses.