GDUFA II User Fees: They Saved Paradise and Put Up a Parking Lot 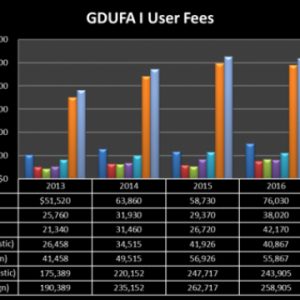 Fall is in the air.  We know that not only beacuse the kids are off to school and the Summer heat is tailing off, but because of the uptick in questions we field on a daily basis concerning user fees under both the Prescription Drug User Fee Act (“PDUFA”) and the Generic Drug User Fee Amendments (“GDUFA”).  After all, the fee payment due date is fast approaching—no later than the first business day on or after October 1 of each year—and folks are rushing to see if there’s a way to save a buck.  But before we get to how to do that (under GDUFA at least), let’s take a Big Yellow Taxi (thanks Joni Mitchell!) back in time to see where we’ve been over both GDUFA I and GDUFA II.

Under GDUFA I, Congress charged FDA with assessing a host of application- and facility-related fees (as well as a so-called “backlog fee” that we won’t get into here).  Unlike historical PDUFA user fee rates, which generally increase year-over-year (see our previous post here), GDUFA I user fee rates fluctuated up and down year-over-year as shown in the table below. GDUFA II radically altered the generic drug user fee regime, creating new Contract Manufacturing Organization (“CMO”) facility fees and program fees (and also eliminating a single fee—the Prior Approval Supplement (“PAS”) fee).  (Or, to borrow from Joni Mitchell, “They took all the fees; And put ’em in a fee museum; And then they charged the people; A whole lot more than a dollar and a half to file and maintain ‘em”.) And that bring us to how a company in the small and medium size operation tiers—and perhaps one or two companies in the large size operation tier—might save a buck or two.  Back in June 2017, we introduced folks to a system we dubbed “ANDA Arbitrage.”  It’s an effort undertaken by a company called ANDA Repository, LLC to help companies potentially decrease annual user fee liability under GDUFA II.

Imagine a parking lot. The owner of a car that is not being used on a daily basis needs a parking space for that car.  In exchange for that parking space (and an annual fee) the car’s owner transfers title of the automobile to the parking lot owner.  The old owner of the car can, with appropriate notice, take back ownership when he decides that he wants to use the automobile again.  Provided the parking lot owner has enough cars, this can be a beneficial venture for all of the parties involved.

If you’re interested in the program, you should reach out to ANDA Repository, LLC soon. The mechanism to communicate to FDA a transfer in ANDA ownership prior to October 1, 2019 should be relatively painless: (1) Transfer of Ownership Letters (Seller) and Acknowledgment of Transfer of Ownership letters (Buyer) to the Office of Generic Drugs; and (2) Email and call CDER Collections notifying them of the change in ownership.