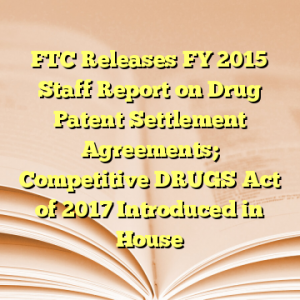 By Kurt R. Karst –
Last week, the Federal Trade Commission (“FTC”) announced the issuance of the Bureau of Competition’s annual summary of agreements filed with the Commission during the last fiscal year (Fiscal Year 2015) – Agreements Filed with the Federal Trade Commission under the Medicare Prescription Drug, Improvement, and Modernization Act of 2003.  The FTC’s FY 2015 Staff Report is the second full fiscal year report issued since the U.S. Supreme Court’s June 17, 2013 decision in FTC v. Actavis, Inc., 133 S. Ct. 2233 (2013), which addressed the standards that courts should apply in drug patent settlement cases (also known as “pay-for-delay” or “reverse payment” cases) (see our previous post on the Actavis decision).
According to the FTC Staff Report, FY 2015 saw pharmaceutical companies file “170 agreements constituting final resolution of patent disputes between brand and generic pharmaceutical manufacturers,” but only 14 final settlements (involving 11 different brand-name products) “potentially involve pay for delay because they contain both explicit compensation from a brand manufacturer to a generic manufacturer and a restriction on the generic manufacturer’s ability to market its product in competition with the branded product.” That’s a drop from the 21 agreements reported in FY 2014, and a significant decrease from the record 40 agreements reported in FY 2012. In addition, only 39 of the 170 agreements reportedly involved ANDA sponsors eligible for 180-day exclusivity, of which 7 are identified by the FTC as “potential pay-for-delay settlements.”  The number of potential pay-for-delay settlements is the lowest since FY 2005 when there were two such agreements.
The downward trends in potential pay-for-delay settlements and settlements involving ANDA first-filers become quite apparent when we at the FDA Law Blog add percentages to the numbers supplied by the FTC and (as we have done in the past) illustrate the numbers in a table.

Last year, the FTC noted in a blog post that the Commission was hesitant to say that the declining number of concerning agreements showed a “lasting trend.” This year, the FTC did not comment much on the report other than noting that “[w]hile the number of reverse-payment settlements has declined in FY 2014 and FY 2015, Bureau of Competition staff continues to review each patent settlement it receives to identify potentially anticompetitive agreements.”
The declining number of potential pay-for-delay settlements and settlements involving ANDA first-filers begs the question: Is legislation still necessary to address patent settlement agreements? For the better part of a decade, we’ve seen bill after bill introduced in Congress, such as the “Preserve Access to Affordable Generics Act” (see our previous post here), to address a perceived problem in the pharmaceutical industry.  Well, despite the FTC’s last two reports (FYs 2014 and 2015), there’s still a perception among some Members of Congress that legislation is needed. . . .
On October 25, 2017, Rep. Lloyd Doggett (D-TX), along with several other co-sponsors, introduced H.R. 4117, the “Competitive DRUGS Act of 2017” (a.k.a., the “Competitive Deals Resulting in Unleashed Generics and Savings Act of 2017”). The Competitive DRUGS Act of 2017 borrows heavily from previous iterations of the Preserve Access to Affordable Generics Act.  For example, the new bill would amend the FTC Act to add a new section – Section 27 – to permit the FTC to “initiate a proceeding to enforce the provisions of [new Sec. 27] against the parties to any agreement resolving or settling, on a final or interim basis, a patent infringement claim, in connection with the sale of a drug product” if “an ANDA filer receives anything of value,” including an exclusive or even a non-exclusive license – apparently a new addition to the bill – and if “the ANDA filer agrees to limit or forego research, development, manufacturing, marketing, or sales of the ANDA product for any period of time.” Such agreements, if challenged, would be presumptively anticompetitive and unlawful unless it can be demonstrated “by clear and convincing evidence” that “the procompetitive benefits of the agreement outweigh the anticompetitive effects of the agreement,” or, if the value received “is compensation solely for other goods or services that the ANDA filer has promised to provide.”
A new aspect of H.R. 4117 that we don’t recall seeing before is Section 2 of the bill, titled “Clawback of research and development tax benefits for manufacturers engaging in pay-for-delay.” That section states, generally, that:

If the [FTC] determines under section 27 of the [FTC Act] that the taxpayer violated section 5 of such Act in connection with the sale of a drug product (as defined in such section), then the tax under [Section 41 of the Internal Revenue Code of 1986] for the taxable year which includes the date of such determination shall be increased by the sum of the product for each of the 2 relevant years of—
(A) the aggregate decrease in the credits allowed under section 38 for such relevant year which would have resulted solely from reducing to zero any credit determined under this section, multiplied by
(B) the sales ratio for such drug product for such relevant year.

Like past legislative attempts to address patent settlement agreements, the prospects that the Competitive DRUGS Act of 2017 will be enacted into law seem dim.