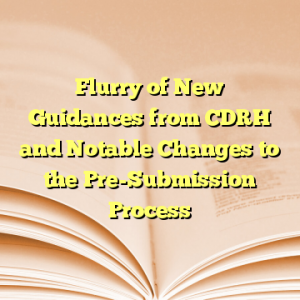 By Allyson B. Mullen –
Getting an early jump on winter, between September 29 and October 2, CDRH issued a blizzard of new guidance documents. All eleven of these guidances were issued based on commitments from MDUFA IV.  These guidances consist of:

A full list of the guidances can be found here.
The first eight guidances are mainly administrative and are consistent with the commitments described in MDUFA IV, which we summarized in our FDARA Summary. The revised 517A appeals guidance reflects the change from FDARA indicating that a substantive summary must now include an explanation regarding how the least burdensome requirements were considered and applied in the decision being appealed.  Given the boilerplate nature of least burdensome explanations, it is not clear that this will be of any real value.  In addition, the guidance adds that decisions regarding breakthrough decisions (granting/denial) are considered significant decisions, which can be appealed under Section 517A.
The revised pre-submission guidance has a few notable changes. These modifications primarily relate to meeting timing, scheduling of meetings, and meeting minutes.  The timeframe for most pre-sub types set forth in Table 1 of the guidance are unchanged.  However, consistent with MDUFA IV, the timeframe for general pre-submission has been modified.  Specifically, in the original 2014 guidance, FDA committed to having a meeting/teleconference (if requested) within 75 to 90 days from receipt of the pre-submission.  The guidance also committed to providing written feedback within 3 business days of the meeting/teleconference.  In the updated guidance, FDA now commits to generally holding meetings within 60 to 75 days of submission receipt and providing written feedback within 70 days of receipt or 5 calendar days prior to a meeting/teleconference, whichever is sooner.  The meeting timeframe is not much different from what was happening in practice prior to release of the new guidance.  In our experience, FDA has, when possible, been holding meetings within 60 to 75 days.  However, written feedback has sometimes been delayed, occasionally coming just a day before the meeting.  Receiving written feedback 5 calendar days before the meeting should allow submission sponsors more time to digest FDA’s written comments and prepare for their meetings.
The guidance also provides a more formalized process for scheduling pre-submission meetings. Sponsors will still need to propose three dates for a meeting/teleconference in its pre-submission.  Within 15 days of receipt, FDA will still conduct its acceptance review, which is unchanged.  Once accepted, FDA will either confirm one of the sponsor’s proposed dates or propose two alternative dates, which should be within 75 days of submission receipt.  FDA will work with the sponsor to set a meeting date between acceptance of the submission and 30 days after submission receipt.  If a meeting has not been scheduled by day 40, an FDA manager will call the sponsor to resolve the scheduling conflict.  In our view, this process was a much-needed addition to the guidance.  With all of its other obligations, FDA has sometimes fallen short on setting pre-submission meetings in a timely fashion.  We hope these new procedures will help facilitate timely meeting scheduling.
Another notable change is that the 2014 guidance said that an applicant could request the manner in which is preferred to receive feedback (i.e., meeting, teleconference, in writing). The guidance also said “please note that FDA will ultimately decide the means of communicating the feedback, but will consider the desired method requested in the Pre-Sub.”  This quoted language has been removed in the revised guidance.  While we are only aware of a couple of instances in which FDA did not provide the feedback in the manner requested by the sponsor, we are happy to see that this language has been removed.  The removal should mean that FDA will provide the type of feedback requested by the sponsor.
The final change relates to meeting minutes. The revised guidance indicates that at the beginning and end of a pre-submission meeting/teleconference, the sponsor must affirmatively state that it will draft minutes and provide meeting minutes to FDA within 15 calendar days of the meeting.  For those that have been to a pre-sub meeting recently, this is a statement that FDA typically makes at the start and end of the meeting.  Putting the responsibility on the sponsor may seem unusual; however, at the recent AMDM IVD Focus Meeting (October 5, 2017 in Los Gatos, CA), Elizabeth Hillebrenner, M.S.E., Associate Director for Programs and Performance at OIR indicated that FDA has had issues with pre-submission sponsors submitting meeting minutes.  Ms. Hillebrenner noted that issues generally include not submitting minutes at all, not submitting within 15 days, or submitting minutes that are inadequate to document the meeting (e.g., insufficient detail).  With this critique in mind, it makes sense that FDA would want manufacturers to acknowledge that they will draft and submit minutes within 15 days.  This procedural change should not be burdensome for sponsors.  Presumably, if a manufacturer forgets to make the requisite statement at the beginning and end, FDA will remind the company.
Ms. Hillebrenner’s comments should also remind all pre-submission sponsors of best practices when it comes to meeting minutes. Sponsors should ensure that at least one person at the meeting is solely responsible for taking minutes.  The minutes should not be a transcript of the meeting.  However, they should be sufficiently detailed to document the discussion that occurred.  Well drafted meeting minutes benefit both the sponsor and FDA ensuring that there is an adequate, detailed account of the meeting.