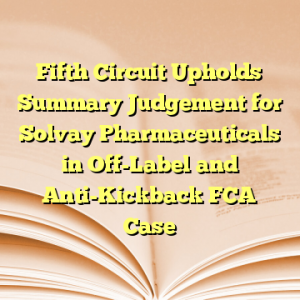 By Jennifer M. Thomas & Andrew J. Hull –
It is the False Claims Act (FCA) case that wouldn’t die. The complaint in United States ex rel. King v. Solvay Pharmaceuticals, Inc. was originally filed in 2006 in the U.S. District Court for the Southern District of Texas. Through a series of partial summary judgment rulings, the District Court finally dispensed with the case (in Solvay’s favor) in March 2016. But the matter didn’t end there, as Solvay sought costs under 28 U.S.C. § 1920, and relators John King and Tammy Drummond appealed the District Court’s decision on both the merits and the award of costs to the Fifth Circuit. Now it appears the case may finally be at an end, with a Fifth Circuit ruling that upholds the District Court’s judgment in full, including $232,809.92 in taxable costs awarded to Solvay.
By way of background, the relators alleged that Solvay engaged in the off-label marketing and distribution of three drugs (Luvox, Aceon, and AndroGel) in violation of the FDC Act and the Anti-Kickback Statute (AKS). After federal and state governments declined to intervene in the case against Solvay at the District Court level, the District Court determined that relators John King and Tammy Drummond had not overcome the FCA’s public disclosure bar (a jurisdictional bar at the time) with respect to AKS/FCA claims associated with AndroGel, because they failed to establish their status as original sources of the information on which the claims were based. The District Court further held that relators had failed to sufficiently demonstrate that either Solvay’s alleged off-label marketing of Luvox and Aceon, or lobbying of state P&T committees and third-party publisher DrugDex regarding those drugs, actually caused the submission of false claims to the government.
After an exhaustive review of the evidentiary and other determinations made by the District Court, on September 12, 2017, the Fifth Circuit agreed with the District Court and upheld its disposition of the Solvay case. Evaluating the summary judgment decisions de novo, the Court held that there was no genuine issue of material fact as to whether the relators were original sources, or as to the causation evidence (or lack thereof). Relators had failed to establish, beyond mere speculation, that alleged “kickbacks” had caused the submission of false claims, or that off-label marketing had produced such claims, despite some evidence of a widespread off-label marketing scheme that relators alleged necessarily must have resulted in false claims.
Most interesting to us is the Court’s discussion of the difficulty of meeting the materiality standard in off-label promotion cases. We have been following how different federal courts around the country have been applying the Supreme Court’s materiality requirements discussed in its 2016 Escobar decision in the FDA regulatory context (see some of our previous posts here, here, here, and here). In this case, the Court latched onto a comment from a discussion that occurred during oral argument regarding the fact that Medicaid “pays for claims without asking whether the drugs were prescribed for off-label uses or asking for what purpose the drugs were prescribed.” Slip Op. at 13 n. 9. The Court noted that “[i]f this is true, given that it is not uncommon for physicians to make off-label prescriptions, we think it unlikely that prescribing off-label is material to Medicaid’s payment decisions under the FCA.” Id. (citing Universal Health Servs. Inc. v. United States ex rel. Escobar, 136 S.Ct. 1989, 2003-04 (2016)). This position, if widely accepted, would strike a blow to many future FCA cases involving the alleged off-label marketing of drugs or devices.
Finally, the Fifth Circuit approved the lower court’s award of taxable costs to Solvay under 28 U.S.C. § 1920 and Fed. R. Civ. P. 54(d)(1), while recognizing that the award amounted to “a fraction of the nontaxable expenses borne by litigants . . . .” An award of costs to defendants in these cases is rare, and helps serve as a check on overeager relators filing qui tam complaints without adequate legal or factual support.
Although relators could petition for rehearing or hearing en banc, and have 90 days (until December 11) to file a petition for writ of certiorari on any of the merits issue or on the award of costs, we think the possibility of further review is unlikely.