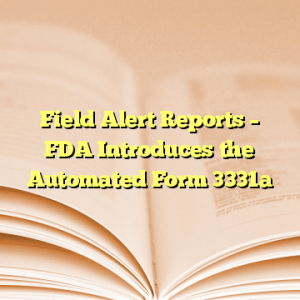 By Mark I. Schwartz –
Earlier this year, we blogged about FDA’s Field Alert Report (or FARs) reporting requirements under 505(k) of the Federal Food, Drug, and Cosmetic Act. The requirements have been in effect since 1985, when the agency promulgated the regulatory provision at 21 CFR 314.81(b)(i).
At the time of our blog on the issue, among other things, we referenced FDA’s Compliance Program Guidance Manual 7356.021, which provides instructions to FDA personnel for conducting activities to evaluate industry compliance with FDA’s field alert reporting requirements. We also referenced Form 3331, which is the form manufacturers are expected to use to submit their FARS.
What we did not mention is that in May of 2013, FDA had launched a voluntary pilot program to modernize the FAR submission and review process by allowing firms to submit FARs electronically using an XML-enabled PDF form. XML stands for “Extensible Markup Language”, and it is a meta-language which allows users to define their own customized markup languages, particularly to display documents on the Internet. The XML-enabled form is known as FDA Form 3331a, and it eliminates the need to fax or scan the form to the firm’s local FDA field office.
This pilot project ended on June 15th, 2017, and the agency has stated that the following objectives for the pilot project were achieved:

Allowing simultaneous reporting to FDA’s Office of Regulatory Affairs (ORA) and CDER; and

Determining the feasibility of transitioning from a simple PDF to a functional PDF.

FDA concluded that the use of the automated form “…improved the speed and efficiency of reporting on product quality issues related to the manufacture of drug products approved under a new drug application (NDA) or abbreviated new drug application (ANDA) by FDA.”
With the data that FDA gathered from FARs submissions over the four year period of the pilot project, as well as from explicit feedback from pilot project participants, the agency has created a new version of the automated Form 3331a. Some of the changes to the form that was used in the pilot project are as follows:

Fields have been rearranged;

Most of the fields are now expandable;

The lot number and expiration date fields have been combined;

The dosage form and strength/package size data are now in separate fields;

The new version of the form can be used to submit FARs for NDA or ANDA products that fall under the jurisdiction of CDER or CBER;

Signatures are not required.

FDA also mentioned that the agency is working on meeting the technical requirements for receiving FARs as part of the electronic Common Technical Document (eCTD) through the Electronic Submissions Gateway, and that this process will be described in a future guidance document.