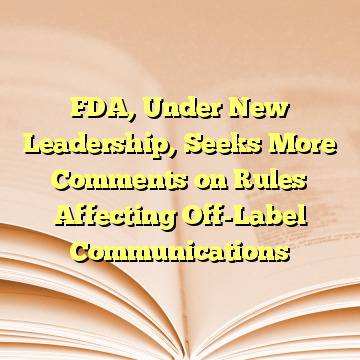 By Anne K. Walsh –
Dr. Scott Gottlieb was sworn in as FDA’s 23rd Commissioner on May 11, 2017. There has been a lot of speculation about what policies he will prioritize for the Agency during his tenure.  A review of his background shows he has been an advocate for autonomy in the practice of medicine and the use of medical products for off-label uses.  He has opined that doctors are appropriately trained to make medical decisions based on the best interest of their patients.  Dr. Gottlieb is well-versed on the controversies surrounding FDA’s current restrictions on drug and device manufacturers from discussing off-label uses with health care practitioners.
Given his expertise, he may be poised to loosen FDA’s enforcement of off‑label communications and to provide clarity to industry on these issues. Perhaps it is telling that one of the first actions the Agency has undertaken since his confirmation was to further extend the time period for reviewing the rules defining “intended use.”  As reported here, FDA derives authority to regulate a product based on its intended use. Although FDA first proposed changes to the “intended use” rules back in 2015, it was not until after the 2016 election but before the inauguration, that FDA issued its final rule.  It is not uncommon for a former administration to fast-forward pending rules before the political climate shifts; nor is it uncommon for a new administration to stay the most-recently implemented rules until it has time to consider them.
In the case of the “intended use” rules, FDA issued the final rule on January 9, 2017, with a stated effective date of March 21, 2017. The proposed version of the rule was markedly different from the January 9 version because it permits FDA to look at the “totality of the evidence” in determining a manufacturer’s intended use for its drug or device.  Pharmaceutical groups filed a Citizen Petition requesting reconsideration of the language, and FDA without the benefit of a confirmed Commissioner, agreed to delay the effective date of the rule for a year.  FDA solicited comments on the decision to postpone the effective date, as well as on its regulation of product distribution in light of First Amendment considerations.  The 60-day comment period was expected to end on May 19, 2017.
Yet on May 18, 2017, without substantive explanation, FDA further extended the comment period until July 18, 2017. According to the Federal Register notice, FDA “has received a request for a 30-day extension and another request for a 90-day extension of the comment period . . . . The requests conveyed concern that the current 60-day comment period does not allow sufficient time to develop a meaningful or thoughtful response to issues FDA raised in the Final Rule Extension.”  The 90-day extension request was submitted on April 5, 2017, by the same group that filed the Citizen Petition leading up to the initial comment period: the Medical Information Working Group, the Pharmaceutical Research and Manufacturers of America, and the Biotechnology Innovation Organization.  We were unable to find in the docket the request FDA referenced that sought a 30-day extension.
It is unclear why FDA felt compelled to honor requests for more time in this case. The additional time could signal that the new Commissioner seeks to weigh in before FDA takes further action related to these rules affecting off-label communications.  We will continue to monitor these developments closely.