FDA: Protecting the Integrity of Horse Racing Since 1906 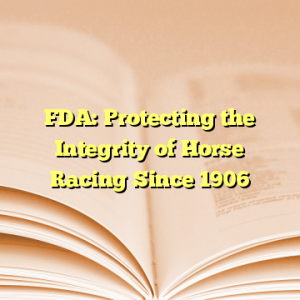 By Andrew J. Hull –
Our postings on the FDC Act typically focus on more straightforward applications of FDA’s regulation of the food and drug world. Drug development, patent dances, off-label promotion prosecutions, newly defined menu labeling—these are some of the many issues we associate with FDA’s activities.
But since the passage of the Food and Drugs Act of 1906 (the predecessor to the modern FDC Act), FDA has asserted its statutory and regulatory authority in a number of unexpected/unique circumstances.
The most recent example: the prosecution of a racehorse doping scandal in Pennsylvania.
FDA’s Office of Criminal Investigation has investigated and been involved in the prosecution of Murray Rojas, a veteran horse trainer and non-veterinarian, who was indicted on allegations that, inter alia, from 2002 through 2014, she directed the administering of prohibited substances to the horses she trained prior to over forty separate horse races at the Penn National Race Course in Grantville, Pennsylvania (just outside of Harrisburg) (see OCI’s press release announcing the indictment here).
The indictment, filed in the U.S. District Court for the Middle District of Pennsylvania, charges the defendant with felony misbranding under the FDC Act, claiming that the defendant misbranded the drugs with intent to defraud or mislead, in violation of 21 U.S.C. §§ 331(k), 333(a)(2), and 353(f)(1)(C). Specifically, 21 U.S.C. § 353(f)(1)(C) states that the dispensing of an animal drug that must be administered under the professional supervision of a licensed veterinarian (i.e., a prescription drug) constitutes the misbranding of a drug if it is not “dispensed by or upon the lawful written or oral order of a licensed veterinarian in the course of the veterinarian’s professional practice.” 21 U.S.C. § 353(f)(1). Generally, an “order” is “lawful” if it is a prescription or, if an oral order, it is both promptly reduced to writing and filed by the person filling the order. Id. § 353(f)(1)(B).
The defendant brought a motion to dismiss these counts, arguing that a violation of 21 U.S.C. § 353(f)(1)(C) can only occur if an unlicensed veterinarian or non-veterinarian administers the drugs to an animal. Because the individuals who allegedly acted under the defendant’s direction were licensed veterinarians, the defendant contended that these counts were legally deficient.
In a recent decision, the court denied the motion to dismiss the indictment counts involving the criminal misbranding of animal drugs. Specifically, the court held that the indictment sufficiently alleged misbranding and conspiracy to misbrand. In doing so, the court reasoned that 21 U.S.C. § 353(f)(1) requires that the administration of a prescription drug to an animal must be done pursuant to either a prescription or some other lawful written or oral order of a licensed veterinarian in the course of the veterinarian’s professional practice. It is not sufficient that the individual administering the prescription drugs be a veterinarian in order to avoid criminal misbranding liability under the FDC Act. The court observed that the indictment sufficiently alleged a violation. The court’s ruling was not a finding that any violation had occurred. The court noted: “It will be for the factfinder to determine at trial whether the licensed veterinarians dispensed any prohibited substances to horses in contravention of Pennsylvania law, and if so, whether they were acting lawfully in accordance with their professional practices or merely at the behest of Defendant during such administration.”
The trial and jury selection is scheduled to start on June 19, 2017.