FDA Licences Renflexis; Some Firsts for this Remicade Biosimilar 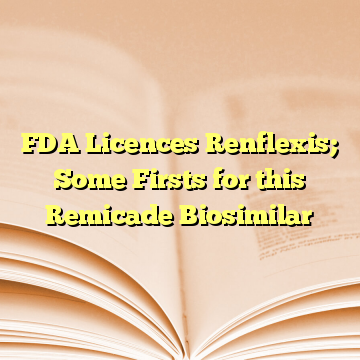 By Sara W. Koblitz –
On April 21, FDA approved Samsung Bioepis’ Renflexis, a biosimilar referencing Pfizer’s Remicade. Like Remicade, Renflexis is approved for the treatment of Crohn’s Disease (both pediatric and adult), Ulcerative Colitis, Rheumatoid Arthritis, Ankylosing Spondylitis, Psoriatic Arthritis, and Plaque Psoriasis.  Remicade was approved as an Orphan Drug in 1998 and faced no competition until April 2016. In April 2016, FDA approved Inflectra, another biosimilar product referencing Remicade.
The approval of Renflexis marks just the fifth biosimilar to have received approval since the implementation of the BPCIA in 2005.  It also marks the first time that FDA has approved a biosimilar referencing a product that already has a biosimilar (and without an advisory committee meeting), introducing more competition into the Remicade market and an element of competition between biosimilars themselves. While it is obviously too early to see a competitive effect of this approval, it should, in theory, have a positive impact on biologic prices for consumers.
However, at this point, the effect of the BPCIA on biologic prices has been less than hoped.  Zarxio, referencing Neuopogen, was only 15% lower in price than Neuopogen after six months on the marketing and only captured about 10% of Neupogen’s market share. Similarly, Inflectra has captured about the same from Remicade thus far. In a typical small molecule product, generics are approximately 40% of the cost of the reference product and capture about 75% of sales. Granted, generics are, by definition, interchangeable with their reference products while biosimilars require extra approval to be considered interchangeable. But from an economic standpoint, the more biosimilars approved for a product, the more prices should fall. However, how accurate this prediction will be in the biosimilar context is an open question given that biosimilars are not interchangeable with their reference products. (No product has yet been approved as interchangeable under the BPCIA.)
Without mandatory substitution, biosimilars will only capture more market share if health care professionals make the conscious decision to switch from a reference product to a biosimilar.  And this will require their review of labeling and literature to determine if a biosimilar is appropriately substitutable for its reference product. With multiple options in the same category, this will make more work for already hurried health care professionals. There is also a question of whether Renflexis will contribute to a larger erosion of the Remicade market share or whether it will only eat away at the market share of Inflectra. And, given the naming conventions adopted for biosimilars, each biosimilar will need to build brand awareness of its own product: because each biosimilar has a distinct name, the marketing required by biosimilar companies could eat into potential savings for consumers.
In time, we may see more state rules relating to substitution in an effort to increase the competitive effect of biosimilars, but there is no telling how states will handle the issue of interchangeability.  While more competition is definitely a step in the right direction for biologic pricing, it remains to be seen whether non-interchangeable biosimilars will actually have an impact on the biologic market and its prices.