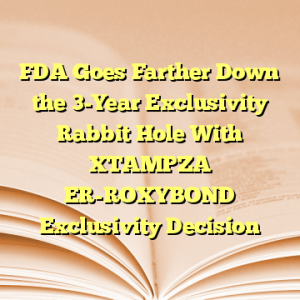 By Kurt R. Karst –
Children of the 1970/80s can easily recall that famous “How many licks does it take to get to the center of a Tootsie Pop?” commercial. Well, there’s a Hatch-Waxman version of that question: “How many approvals does it take to get to the center of 3-year exclusivity?”  While the world has known for a couple of years the answer to the Tootsie Pop question, FDA only recently provided an answer to the Hatch-Waxman version of the question.  And as with other recent 3-year exclusivity issues, the answer has come up in the context of abuse-deterrent opioids (see our previous posts here, here, here, and here).  But before we give up the answer, some background is on order. . . .
On April 26, 2016, FDA approved Collegium Pharmaceuticals, Inc.’s (“Collegium’s”) NDA 208090 for XTAMPZA ER (oxycodone) Extended-release Capsules for the management of pain severe enough to require daily, around-the-clock, long-term opioid treatment and for which alternative treatment options are inadequate. XTAMPZA ER was approved as a 505(b)(2) NDA, relying on FDA’s finding of safety and effectiveness for  OXYCONTIN (oxycodone HCl) Controlled-release Tablets (NDA 022272).
XTAMPZA ER was approved just days after the expiration of a period of 3-year exclusivity applicable to OXYCONTIN. That exclusivity was granted based on FDA’s April 16, 2013 approval of NDA 022272/S014, and was coded in the Orange Book as “M-153” (which is defined as: “ADDITION OF INFORMATION REGARDING THE INTRANASAL ABUSE POTENTIAL OF OXYCONTIN”).  In a March 3, 2015 Memorandum, the CDER Exclusivity Board explained the Agency’s decision to grant a period of 3-year exclusivity with respect to the April 16, 2013 approval of NDA 022272/S014 (see our previous post here), as well as the scope of that exclusivity: “the scope of 3-year exclusivity in this instance is limited to the addition of information to the [OXYCONTIN] labeling regarding the reduction of abuse via the intranasal route.”
In support of it’s NDA for XTAMPZA ER, Collegium conducted a couple of its own clinical investigations: an efficacy trial and a human abuse liability study assessing deterrence of intranasal abuse (Study CP-OXYDET-21). FDA subsequently granted Collegium a period of 3-year exclusivity for XTAMPZA ER that expires on April 26, 2019 and that is coded in the Orange Book as “NP” (for “New Product” exclusivity).
In light of a then-pending NDA for Inspirion Delivery Sciences, LLC’s (“Inspirion’s”) ROXYBOND (oxycodone HCl) Tablets, 5 mg, 15 mg, and 30 mg (NDA 209777) for the management of pain severe enough to require an opioid analgesic and for which alternative treatments are inadequate, the CDER Exclusivity Board once again earlier this year had to assess the scope of 3-year exclusivity – in this case for XTAMPZA ER – and whether that exclusivity served as an obstacle to the approval of ROXYBOND. In a 20-page Memorandum dated April 20, 2017, the CDER Exclusivity Board concluded that “Xtampza ER’s exclusivity based on study CP-OXYDET-21 covers the specific formulation of Xtampza ER associated with its inlranasal [abuse-deterrrent] properties,” and that “[b]ecause RoxyBond’s formulation associated with its intranasal AD properties is different from that of Xtampza ER, it does not share any exclusivity-protected conditions of approval of Xtampza ER” and the 3-year NP exclusivity applicable to XTAMPZA ER “should not block approval of RoxyBond” (emphasis added).  So, FDA approved NDA 209777 for ROXYBOND on April 20, 2017.  (By the by, Pharmaceutical Manufacturing Research Services, Inc. recently filed a Complaint in the U.S. District Court for the Eastern District of Pennsylvania challenging FDA’s ROXYBOND approval.)
That’s right! Although FDA previously articulated what we’ve dubbed a “route of abuse” approach to abuse-deterrent opioid 3-year exclusivity, that approach has evolved.  It’s been modified a bit to account for formulation differences and the type of abuse-deterrence technology used (e.g., physical/chemical barriers, agonist/antagonist combinations, aversion, delivery system, and others discussed in FDA guidance).  FDA explains the general exclusivity framework as follows:

The following example provided by FDA illustrates the above concepts:

FDA’s evolution in thinking has caused the Agency to reassess the scope of previously granted exclusivity. According to FDA:

In light of the evolution of the Agency’s approach to assessing 3-year exclusivity for certain [abuse-deterrent] opioids . . . . [the CDER Exclusivity Board] reassessed the scope of OxyContin’s 3-year exclusivity related to S-14. Applying an approach to the scope of 3-year exclusivity for [abuse-deterrent] opioids . . . in which the scope is defined by two primary characteristics: (1) the abuse route (intranasal); and (2) the type of abuse deterrence applied (physiochemical properties), the Board recommended that the scope of OxyContin exclusivity be limited to the condition of approval supported by the intranasal [human abuse liability] study, i.e., “labeling describing the expected reduction of abuse of a single-entity oxycodone by the intranasal route of administration due to physiochemical properties.”

With that reassessment, FDA then defined the narrowing scope of each period of successive 3-year exclusivity for single-entity oxycodone: