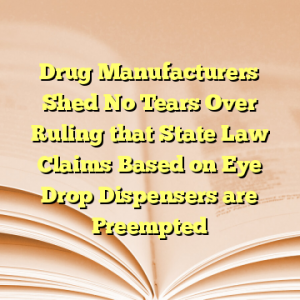 By JP Ellison –
Late last month, Judge Wolf, in the federal district court for the district of Massachusetts, dismissed a putative class action against a number of defendants based on impossibility preemption.  The plaintiffs’ basic allegations were that the defendants, all of which manufactured or distributed prescription eye drops, had dispensers that “were intentionally designed to dispense more liquid than the human eye is capable of absorbing.” Plaintiffs further alleged that the purpose of this unfair practice was to cause consumers to purchase more of their product than necessary thereby increasing defendants’ profits.  Before getting to its analysis, the court’s opinion summarized recent Supreme Court decisions – Wyeth v. Levine (failure to warn claims against brand manufacturer not preempted under impossibility preemption because of FDA’s changes being effected (CBE) regulation); Pliva v. Mensing (failure to warn claims preempted because generic manufacturers cannot use CBE regulation); and Mutual Pharm. v. Bartlett (option to stop selling product does not avoid impossibility preemption).
Against that backdrop, the court reasoned that plaintiffs’ claims were preempted because “defendants here could not have marketed droppers that complied with state consumer protection and unjust enrichment laws in the manner plaintiffs advocate without the FDA’s prior approval.”  Central to the court’s analysis were two FDA guidance documents that classified as major changes—and therefore changes that could not be made under the CBE regulation—any changes to the size and shape of the container for sterile drug products such as eye drops.  Based on these guidance documents, the court reasoned that it was impossible under federal law for the defendants to make the changes that plaintiffs alleged were necessary under state law.
The court, while recognizing a split in authority, was unpersuaded by the argument that plaintiffs’ claims were not preempted because defendants could have designed their products differently prior to FDA approval.  The court did not reach several arguments raised by the defendants, including but not limited to a separate motion by generic defendants based on the Supreme Court’s analysis of the availability of CBE to generic manufacturers