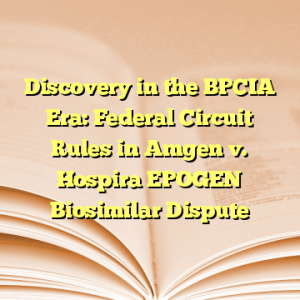 By Sara W. Koblitz –
As we mentioned back in July, courts continue to address a wide variety of procedural questions arising from the Biologics Price Competition and Innovation Act (“BPCIA”). The most recent is a decision from the Federal Circuit in an interlocutory appeal pending since July 2016 in the revised Amgen v. Hospira matter, Case 1:15-cv-00839 (D. Del.), No. 2016-2179 (Fed. Cir. 2017).  Like many of the recent BPCIA actions of late, this case raises questions about how a reference product sponsor can adequately assert its patent rights when the biosimilar sponsor doesn’t provide all of its manufacturing information.
Here, the Federal Circuit essentially told Amgen that it won’t mandate discovery to support a fishing expedition.  Alleging various failures to comply with the BPCIA, Amgen filed its initial patent infringement complaint against Hospira with respect to a biosimilar version of Epogen in the District Court of Delaware. In the course of this litigation, Amgen appealed to the Federal Circuit the District Court’s denial of its Motion to Compel Discovery of Hospira’s biosimilar manufacturing process and related cell-culture information.  In the alternative, Amgen requested a Writ of Mandamus order to compel discovery.  The Federal Circuit denied both of these requests as meritless.
Disposing of the Motion to Compel Discovery quickly, the Federal Circuit explained that it lacked jurisdiction over the Motion to Compel under the collateral order doctrine, as discovery rulings generally do not qualify for exception to the final judgement rule (requiring parties to wait until final judgment to appeal rulings). Amgen argued that waiting until final judgment renders the decision “effectively unreviewable,” but the Federal Circuit could not identify a clear-cut statutory purpose undermined by denying immediate appeal.
In the alternative, Amgen argued for mandamus under the All Writs Act ordering the District Court to compel discovery. The Federal Circuit explained that mandamus is a drastic remedy reserved for extraordinary cases with no other means to attain the requested relief; a party seeking this remedy must demonstrate “clear and indisputable” right to such relief.  Here, the Federal Circuit could not identify a “clear and indisputable” right to the cell-culture information.  The Court explained that the BCPIA, as interpreted by the Supreme Court in Sandoz v. Amgen, leaves two relevant avenues for Amgen to secure process information from Hospira: sue for infringement of the patents included on the patent list exchanged with Hospira or sue for infringement of a patent that could be identified on such a list of patents.  Because Amgen did not list any of or bring suit on any of its cell-culture patents, the cell-culture process is not relevant to any claim of infringement asserted by Amgen (or any of Hospira’s defenses or counterclaims).  Amgen even conceded as much.
The Federal Circuit emphasized that “[n]othing in Sandoz suggests that the BPCIA somehow supplants the preexisting rules of civil procedure.”  While a sponsor may access information through discovery and a sponsor may list or sue on a patent for which an applicant has not provided information – all without risking Rule 11 sanctions (targeting arguments that have no evidentiary support) – the usual rules governing discovery still apply in the BPCIA context.  While an outline of BPCIA-avenues for obtaining withheld information certainly helps provide clarity, the denial of this interlocutory appeal isn’t surprising.  Nothing in Sandoz or any other BPCIA decision indicates a shit in civil procedures rules, but it is always helpful to have that in writing.
For now, Amgen v. Hospira continues on . . . without cell-culture information.