Deregulatory Agenda Notwithstanding, the Enforcement Side of the House is Open for Business 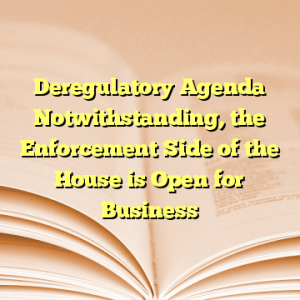 By Ricardo Carvajal & JP Ellison –
FTC and FDA issued a blog posting co-authored by senior officials that encourages the public to report potentially violative dietary supplements to one or both agencies.  The posting lists the following as circumstances that should prompt a report:

“You bought a dietary supplement that didn’t work as advertised – or you had an adverse reaction or illness.”
“You’re suspicious that a company is making false or overstated claims in its labeling or marketing.”
“You’re concerned about the content, purity, or safety of the product.”

The posting goes on to explain which agency has jurisdiction over which issues, but makes clear that mastering that jurisdictional divide is not a prerequisite for reporting:  “If you’re still not sure who to report to, just report it to one of us and we’ll sort it out – the important thing is that you report!”
For those who presumed that the current administration’s deregulatory agenda would reduce the likelihood of all regulatory activity, the posting is a timely reminder that some types of regulatory activity – especially in the enforcement arena – will remain relatively unaffected.