DEA Administrative Decisions Update: What’s Prescribed in Vegas . . . Has Got to Stay in Vegas 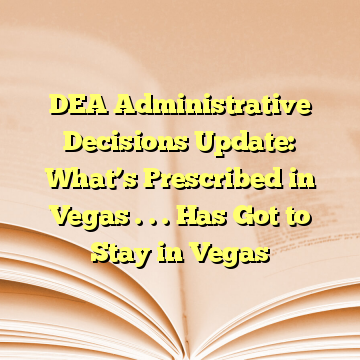 By Andrew J. Hull
On April 17, 2013, Dr. David A. Moon was held up at a TSA checkpoint at a Las Vegas airport. Law enforcement officers stopped the physician—the holder of DEA registrations in Tulsa, Oklahoma, and Las Vegas, Nevada—carrying an unregistered firearm, and found in his carry-on luggage drugs in pill bottles labeled for other individuals, drugs in unlabeled pill bottles, and other loose drugs.  The physician was placed under arrest, and a subsequent DEA investigation ensued.
On December 8, 2015, DEA issued an order to show cause (OSC) alleging that the physician (1) possessed controlled substances with intent to redistribute them to individuals for whom they were not originally dispensed, (2) accepted controlled substances from patients (i.e., non-DEA registered sources) and redistributed them to other patients, (3) failed to conduct a biennial inventory, (4) had shortages of controlled substances and was missing purchase records, and (5) issued prescriptions in Nevada under his Oklahoma license. On top of that, DEA alleged that both Oklahoma and Nevada’s medical boards had revoked his state license to handle controlled substance.
The physician never responded to the OSC, and the Acting Administrator issued a Final Order over a year later on April 27, 2017. Unfortunately, the Administrator declined to rely in his opinion on most of the juicy facts—i.e., the attempted escape from Vegas, the illicit drugs and weapons, and the airport arrest—and determined that DEA had failed to provide sufficient factual or evidentiary support for many of the allegations (e.g., the arrest report submitted on evidence by DEA did not identify that the pills in the physician’s possession were controlled substances).
The Administrator likely left out the interesting facts because he did not need to rely on them to render a decision: The Administrator found that there was evidence that the physician lacked state authority to handle controlled substances (see our previous post here on state authority cases) after both medical boards revoked his state licenses, and that the physician’s improper recordkeeping and issuance of prescriptions in states without proper registration were evidence that his continued registration was not in the public interest. Accordingly, the Administrator revoked the physician’s registration.
Probably the most interesting takeaway from this decision is the Administrator’s discussion of Factor One of the CSA’s public interest factors for practitioners found in 21 U.S.C. § 823(f), specifically the “recommendation of the appropriate State licensing board or professional disciplinary authority.”
Historically, DEA has taken a broad interpretation of this factor to include any form of disciplinary action taken against the registrant (e.g., probation, suspension, revocation, restoration). See, e.g., Tyson D. Quy, M.D., 78 Fed. Reg. 47412, 47417 (Aug. 5, 2013); Daniel Koller, D.V.M., 71 Fed. Reg. 66975, 66981 (Nov. 17, 2006); Saihb S. Halil, M.D., 64 Fed. Reg. 33319, 3320-21 (June 22, 1999); William E. Brown, D.O., 58 Fed. Reg. 64004, 64005 (Dec. 3, 1993).
The plain language of the statute suggests a stricter interpretation, such as an actual recommendation from the state board to DEA, and this interpretation is more consistent with 21 U.S.C. § 824(a)(3)’s separate ground for revocation based on a loss of state authority. (See this law review article for a fuller analysis and critique of DEA’s historic Factor One precedent.)
Breaking from tradition, the Administrator made an interesting statement, perhaps signaling an agency switch in precedent to a strict reading of Factor One. In a footnote, the Administrator noted that there was no evidence relating to a Factor One analysis, despite the prior disciplinary actions by the state boards:

82 Fed. Reg. 19385, 19389 n.9 (Apr. 27, 2017).
This development may be a positive one for practitioner registrants, or it may be a distinction without a difference. The more strict, plain language interpretation of Factor One could allow a practitioner in an administrative hearing to request a recommendation from the appropriate state licensing board (even after a license suspension or probation), and an adverse state action will not necessarily count against the registrant in the public interest determination.  However, that specific determination did not need to be made here, because the practitioner ultimately lacked state authority continue to handle controlled substances.