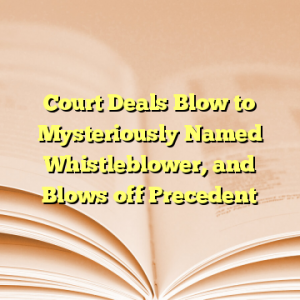 By Anne K. Walsh & Andrew J. Hull –
Earlier this month, the U.S. District Court for the Central District of California dismissed a qui tam complaint filed against Medtronic and its subsidiaries alleging violations of the False Claims Act (FCA).  The relator (an LLC named “The Dan Abrams Company LLC” formed by a former Medtronic employee named Bryan Shapiro) alleged, inter alia, that Medtronic obtained marketing approval for some of its spinal implant products by deceiving FDA as to the intended use of these products, and that Medtronic promoted these products for an off-label use.  As a result, the relator alleged Medtronic caused the submission of false claims to CMS under an implied false certification theory.  The government declined to intervene.
The court’s discussion on the lack of grounds for the relator’s qui tam complaint is significant, particularly for device manufacturers facing fraud-on-FDA or off-label promotion claims under the FCA.
Regarding Medtronic’s alleged fraud to obtain clearance for its devices, the relator claimed that certain devices were designed for a use (cervical) other than the use for which Medtronic sought clearance (thoracolumbar). The court rejected this allegation, noting that FDA may grant 510(k) clearance with labeling limitations if FDA is concerned that a product may be used off-label. See FDC Act § 513(i)(1)(E).  The relator’s claim that a cleared device was actually intended for an off-label use was not itself sufficient to support a claim of improper clearance.  The court explained that “claims of fraud are disfavored if made by third parties who seek to second guess a decision by the FDA to certify a device,” Slip Op. at *8, and it noted that FDA has the enforcement jurisdiction and means necessary to “police” FDC Act violations.  The court cited the First Circuit D’Agostino decision (see our previous post here) to support its holding that an FCA action is an inappropriate tool against allegations of fraud on FDA. Id. at *9.
Surprisingly, the court did not reference the Ninth Circuit’s Gilead Sciences decision from this summer (see our previous post here) that cursorily held that similar claims were supported in the relator’s complaint. In that case, the Ninth Circuit rejected the rationale in D’Agostino and held that allegations of false statements and false conduct by the manufacturer to obtain approval of a drug were adequate to support an FCA claim (at least at the motion to dismiss stage).  As we previously blogged, the company in that case has filed a petition for rehearing or rehearing en banc (still pending), and several industry groups have filed briefs in support of the defendant.
The court dismissed the relator’s off-label promotion theory on the ground that CMS may cover a cleared device used off label if the use is “medically necessary” or “reasonable and necessary” to treat a specific patient. Id. at *10.  Specifically, the allegations “must be sufficient to support the claim that the [devices] were unsafe, untested or otherwise unfit for the purposes for which they were used, and that Defendants nevertheless knowingly promoted them.” Id. at *11.
Unlike other recent cases, the court brushed over the Escobar materiality issue, with little discussion or analysis of what constitutes a “material” false claim.  Medtronic had argued that there could be no materiality where the amount paid by CMS for a spinal surgery is not affected by whether Medtronic’s products were used and where CMS contractors would not know whether one or more of the devices had actually been used in a particular surgical procedure.  The court dismissed these arguments for purposes of Medtronic’s motion, explaining that CMS may still have assigned values to devices “that have been approved through an FDA process.” Id. at *11.  The rationale is confusing, however, and assumes an FDA value-assignment process that is not described in the FDC Act or FDA regulations.
While the court granted Medtronic’s motion to dismiss, it did so without prejudice. Relator may file an amended complaint by October 2, 2017.