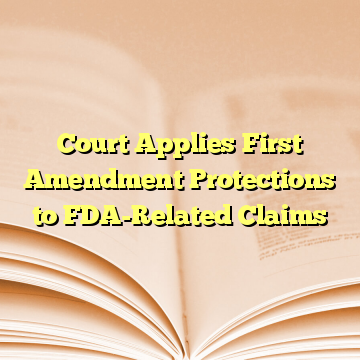 By Anne K. Walsh –
Although the First Amendment has been more often discussed in the context of drug and medical device promotion, the Eleventh Circuit recently evaluated whether claims for a food also deserve similar constitutional scrutiny. In Ocheesee Creamery LLC v. Putnam, the Eleventh Circuit considered whether the State of Florida’s actions prohibiting the truthful use of the term “skim milk” violated the First Amendment, and held that the state’s restriction of the creamery’s description of the product as “skim milk” violated the Central Hudson test for commercial speech regulation.
The Ocheesee Creamery is a seller of skim milk, which, consistent with standard practice, is produced by skimming the cream from the top of the milk. The leftover product is skim milk. Although the skimming process depletes the vitamin A from the milk, the creamery does not replace the lost vitamin A because it sells only all-natural, additive-free products.
The issue arose because Florida law prohibits the sale of “milk” that does not contain vitamin A. During attempts to compromise, the state proposed that the creamery could include a label that used the term “milk product” in place of “skim milk.” The creamery ultimately brought suit in the U.S. District Court for the Northern District of Florida, arguing that the state’s refusal to allow it to call its product “skim milk” amounted to censorship in violation of the First Amendment. The court rejected the creamery’s claim, and granted summary judgment to the state.
On appeal, the Eleventh Circuit disagreed. Its opinion walks through the Central Hudson analysis for evaluating commercial speech. The threshold question asks whether the expression is protected by the First Amendment at all. Commercial speech does not merit First Amendment protection if (1) the speech concerns unlawful activity, or (2) the speech is false or inherently misleading. The court found that the speech did not violate the first prong, relating to unlawful activity, because the state does not ban the sale of milk without vitamin A. Instead vitamin-deficient skim milk can lawfully be sold as “imitation” milk. Thus, the court held that the state’s action is a speech regulation because the court would permit the sale but for the speech: calling it “skim milk.”
The court evaluated the second prong, whether the speech is false or inherently misleading. The state relied on its definition of “skim milk,” which the creamery’s product did not meet because it did not contain vitamin A, and argued that it was false or inherently misleading to consumers to label a product inconsistent with this definition. Curiously, nowhere in the court’s opinion does it reference FDA’s regulation of skim milk at 21 C.F.R. Part 131, which does not contain a similar vitamin A requirement.   The court rejected the state’s premise that any use of a defined term inconsistent with the state’s preferred definition is inherently misleading. “Such a per se rule would eviscerate Central Hudson, rendering all but the threshold question superfluous.” Instead, the court reviewed the Webster’s dictionary definition of “skim milk,” and concluded that consumers did not expect skim milk to meet the state’s “alternative definition.”
Thus, the court concluded that the state did not meet its burden to satisfy Central Hudson, and vacated the summary judgment prohibiting the creamery’s use of the term “skim milk.” The case was remanded to the district court for further consideration.