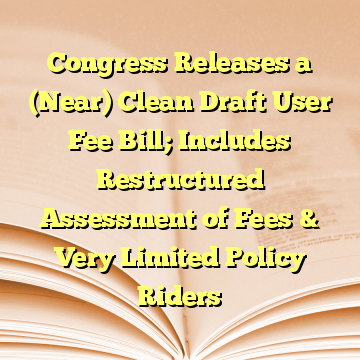 By James E. Valentine –
On April 14, 2017, Congress released a discussion draft of a bill to reauthorize the FDA’s various user fee programs, commonly referred to as “the UFAs.” The FDA Reauthorization Act (FDARA) would renew the Agency’s authority to collect user fees in Fiscal Years 2018 through 2022 and put into effect the commitments negotiated by FDA and regulated industry, which are proposed in the following commitment letters:

Without such legislative action, the authority to collect user fees is set to expire on September 30th. In fact, if the user fee programs aren’t reauthorized before August, FDA will have to send layoff notices to more than 5,000 employees whose positions are supported through user fee funds – and if not enacted, or not in a timely manner, it would cripple the Agency’s drug and device review functions. However, it appears both the Senate and House are interested in a timely reauthorization, with Energy and Commerce Committee Chairman Greg Walden (R-OR) stating that the House is “fully committed to a timely reauthorization of the agreements” and Senate Health, Education, Labor, and Pensions Committee Chairman Lamar Alexander (R-TN) stating “the sooner we reauthorize the agreements the better.”  The full text of the FDARA discussion draft is available here.
A “Clean” User Fee Bill
The most noteworthy aspect of FDARA is what is not included: a litany of policy proposals tacked onto the core user fee reauthorization language. This is counter to what we have come to expect, with the 156 page FDAAA in 2007 and the 140 page FDASIA in 2012 – FDARA is all of 34 pages. This means it includes very minimal provisions that go beyond the language needed for FDA to collect user fees and report on performance and finances, including updating base fee amounts and workload/capacity adjustments.
In addition to potential expediency of passing this proposed legislation that is supported in a bipartisan manner, another possible reason that Congress is interested in a clean bill is that it just had an opportunity to pass comprehensive FDA reform legislation with the 21st Century Cures Act, which was signed into law in December of 2016 (see our summaries of 21st Century Cures here, here, here, and here).
With that being said, there are a number of reforms to the structures of how fees are assessed, as well as a limited number of policy riders, which are discussed in turn below.
Restructuring the User Fee Programs
Under PDUFA VI, FDARA would change the historical structure where prescription drug user fees were derived one-third from facility fees, one-third from various application fees, and one-third from product fees. The new structure would collect 20% from application fees and 80% from fees for approved products, with fees for supplemental applications and facilities being eliminated.
Meanwhile, MDUFA IV would add a user fee for de novo classification requests, which makes sense since there was no apparent reason for an exemption for this type of application, which has grown in popularity.
GDUFA II would eliminate prior approval supplement and establish a generic drug applicant program fee. This program fee would be based on how many ANDAs the applicant has approved by FDA (tiered by 20+ paying the full fee, 6-9 paying 40% of the fee, and 1-5 paying 10% of the fee). Ultimately, 33% of total generic drug user fees will come from application fees, 20% from generic drug facility fees, 7% from API facility fees, and 35% coming from this new program fee.
Finally, BSUFA II would establish a fee structure for biosimilars as follows: (i) Initial Biosimilar Development Fee for the 1st year of clinical development, (ii) Annual Biosimilar Development Fee for subsequent years of clinical development, (iii) Biosimilar Program Fee for sponsors of approved biosimilars, and (iv) Application Fee for new biosimilar applications (and eliminate supplement and establishment fees).
Non-User Fee Policy Riders
As previously mentioned, FDARA includes a limited number of policy riders. There are two device-related policy riders. The first is the proposed establishment of a pilot accreditation scheme for conformity assessment to provide FDA the authority to audit and certify laboratories who conduct device conformance testing to a recognized standard, and also to withdraw the certification if necessary. The second is the proposed reauthorization third party review, with provisions to increase flexibility, such as through conducting a public guidance development process to identify the factors FDA will use to determine which devices are eligible for third party review.
In addition, FDARA would reauthorize a number of other programs for five years:

Finally, FDARA would reauthorize section 505(u) of the Federal Food, Drug, and Cosmetic Act, which provides FDA the authority to grant exclusivity for drugs containing single enantiomers for another 5 years. Perhaps this incentive will be used more in this reauthorization since it has only been used once to date (see our previous discussion of this exclusivity here).
The Future of FDARA
The question remains: will FDARA remain clean? There is still several months before the UFAs need to be reauthorized, so there is plenty of time for other policy priorities (e.g., drug pricing) to make their way into the bill – especially since it is considered “must pass” legislation. And it appears this option is not off the table with Energy & Commerce Committee Chairman Walden stating “as this process proceeds, I look forward to continued discussions with my colleagues in the House on other member priorities that could strengthen this important legislation.”