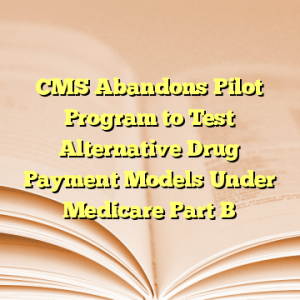 By McKenzie E. Cato* & David C. Gibbons –
In early 2016, CMS issued a proposed rule to test new models for the payment of drugs and biologics under Medicare Part B (see our previous post here). The current statutory payment methodology for most drugs under Medicare Part B is the Average Sales Price (ASP) plus six percent. The proposed five-year pilot program would have tested an alternative payment methodology of ASP + 2.5% plus a flat fee of $16.80 (Phase I) and the effect of four different value-based pricing methods (Phase II). The pilot was to have been conducted under the authority of Section 1115A of the Social Security Act, which authorizes CMS’s Center for Medicare and Medicaid Innovation (CMMI) to test innovative payment models to reduce program expenditures.
On October 4, CMS announced, in a short Federal Register notice, that it has withdrawn the proposed rule. The notice states that the Agency received 1,350 public comments and that “a number of commenters expressed concerns about the proposed model.” Because of the “complexity of the issues related to the proposed model design and the desire to increase stakeholder input,” CMS decided to abandon the proposed pilot. The notice concludes with a statement about how the Agency wants to “ensure agency flexibility” in re-examining these issues.
We will continue to track this and any new initiatives concerning drug payment methodology proposed under CMMI.
* Law Clerk