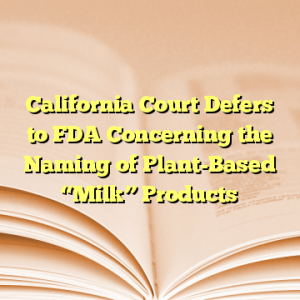 By Riëtte van Laack –
As we reported a couple of months ago, the naming of plant-based products continues to be an issue. For at least two decades, there has been uncertainty as to the use of the term “milk” and other dairy terms for products derived from plant material rather than from animals. Most recently, a California court put the issue squarely on FDA’s plate, declining to hear a case on the merits pending the Agency’s determination on the use of the term “imitation” on products such as soymilk and almond milk.
The case at issue arose when Plaintiffs brought an action claiming that plant-based milks were “imitation” products and should be so identified on the label. This argument represented a change in Plaintiffs’ strategy after Courts appeared to side with defendants in previous cases in which plaintiffs had alleged that terms such as “soymilk” or “almond milk” were misleading. In early June, the District Court of the Eastern District of California concluded that the “imitation” question was an issue of first impression and should be left to FDA rather than to the Court(s).  The Court concluded that the doctrine of primary jurisdiction applied.
As explained by the Court, the FDC Act was enacted to create a uniform and comprehensive labeling scheme. The issue raised in the litigation, i.e., that plant-based milk products are nutritionally inferior substitutes for cow milk and therefore must be identified as “imitation” product, has not been addressed by FDA. Rather than leaving this to the Courts risking inconsistent and contradictory decisions, the determination of labeling these products should be left to FDA; the issue falls squarely within FDA’s jurisdiction and expertise.
Further, the Court noted that the issue is on FDA’s radar: in December 2016, Congress requested that FDA more aggressively police the use of the term “milk” in naming of non-dairy foods and in March 2017, the Good Food Institute submitted a Citizen Petition asking that FDA issue guidance and a regulation concerning the naming of foods by referencing other “traditional” foods (see our previous post here) Thus, the Court stayed the action and referred the matter to FDA.
A few weeks earlier, another California Court in a similar action outright rejected the argument that the label should identify the product as “imitation” because the likelihood for confusion was “patently implausible.”  According to the Court, any consumer “concerned about the nutritious quality of the product” could read the nutrition label. That case was dismissed with prejudice.
The issue of naming plant based foods is not limited to the United States. On the 14th of June, the Court of Justice of the European Union ruled that purely plant-based products cannot be marketed with designations such as “milk,” “cream,” “butter,” “cheese” or “yogurt,” unless specifically exempt under regulation (EU) No 1308/2013.  The relevance of that decision for the U.S. remains to be seen.