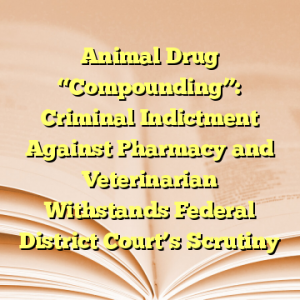 By Karla L. Palmer –
In likely the first time since the United States Court of Appeals for the Fifth Circuit decided Medical Center Pharmacy v. Mukasey, 536 F.3d 385 (5th Cir. 2008) (see our previous post here), a federal court located in the Western District of Louisiana (within the Fifth Circuit) determined that compounded animal drugs are subject to – and thus not exempt from – the Federal Food, Drug, and Cosmetic Act (“FDCA”).  The case, United States v. Kohll’s Pharm. & Homecare Inc., 2017 U.S. Dist. LEXIS 105265, centers on an animal drug compounding pharmacy and a veterinarian.  The veterinarian and the pharmacist allegedly worked together provide a synthetic version of dermorphin to racehorses to influence the outcome of races (it purportedly makes racehorses more focused and helps them run faster).  The drug product is not approved for use by FDA in either humans or animals.  The indictment alleges that, when the pharmacy sent the drug to the veterinarian, it “falsely relabeled the dermorphin product that it had received from a chemical supply company to make it appear” that the dermorphin was a drug compounded by the pharmacy pursuant to a veterinarian prescription.  As such, although the product would not fall under any definition of “compounded drug,” defendants argued the product was a “compound” purportedly exempt from the new drug and other requirements in the FDCA.
The indictment alleged, among other counts, that the veterinarian and pharmacy conspired to introduce, deliver and receive for pay misbranded and adulterated drugs with the intent to defraud FDA, the Louisiana Racing Commission, and State Police (21 U.S.C. § 331(a) and (c)); and alter or remove the drugs’ label, thereby making them misbranded and adulterated (§ 333(a)(2)). Reviewing the pertinent sections of the FDCA to support its position that dermorphin is a “new animal drug” because it allegedly affects the function of the racehorses, the court stated that under Section 360(b) a new animal drug is unsafe unless it is approved by FDA or the subject of an exception.
Enter “compounding” as that “exception.” Defendants argued that drug compounding by veterinarians is exempt from the FDCA, and compounded animal drugs can’t be considered either adulterated of misbranded because they are not “new animal drugs.”  Not buying the defendants’ legal position, the district court stated:

[T]o the extent that defendants argue that an entity which holds itself out as a veterinary compounder is exempt from compliance with the FDCA, that argument fails. The FDCA’s application hinges on the substances in question not who created the substance. Therefore, if a compounded animal drug exception existed under the FDCA, the exception would only apply when the drug in questions was actually compounded.

2017 U.S. Dist. Lexis 105265 *8 (Med. Center Pharmacy).  In fact, the indictment did not even allege that any act of compounding occurred by either the pharmacy or the veterinarian.  It instead described the criminal actions as only “relabeling” by the pharmacy to “make it appear” as if the drug was a compounded drug, from which the veterinarian created a liquid suspension out of powdered dermorphin.  The court went further, however, and found that, even if the product were compounded, the FDCA would still apply.  Being bound by the Medical Center Pharmacy decision in the Fifth Circuit, the district court stated that compounded animal drugs are indeed “new animal drugs” subject to 21 U.S.C. § 321(v)(1) (new animal drug defined).  Because dermorphin allegedly has not been recognized as safe and effective for use in animals (i.e., it is unapproved), it is considered a new animal drug subject to FDCA’s new animal drug approval and other requirements.  The court also noted that the product was adulterated under § 351(a)(5) because the pharmacy allegedly did not sell the product to the veterinarian pursuant to an order in the context of an appropriate vet-patient-client relationship, because no prescription was provided and the underlying application of the drug was illegal under state law.  As to the misbranding allegation, the court stated that it was mislabeled or unlabeled, and did not contain adequate directions for use, in violation of the FDCA, 21 U.S.C. § 352(a)(1), (b), and (c), and (f)(1).