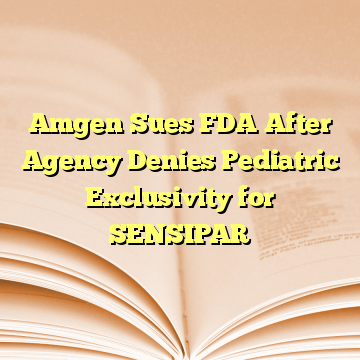 By Kurt R. Karst –
The drought is over! It’s been several months since we’ve seen a new dispute over non-patent exclusivity filed against FDA in a court.  But with a May 25, 2017 Complaint and a Motion for Temporary Restraining Order and/or Preliminary Injunction filed in the U.S. District Court for the District of Columbia, Amgen Inc. (“Amgen”) has ended the drought.  And the dispute concerns a rarely litigated statutory provision: 6-month pediatric exclusivity granted (or denied, as the case is here) under the Best Pharmaceuticals for Children Act (“BPCA”) (FDC Act § 505A).  In fact, we’re only aware of one similar case in the 20 years since FDC Act § 505A has been around: Merck & Co. v. FDA, 148 F. Supp. 2d 27 (D.D.C. 2001) (here) . . . and that case didn’t turn out too well for FDA.  (Of course, there was the initial case of National Pharmaceutical Alliance v. Henney, 47 F. Supp. 2d 37 (D.D.C. 1999) (here), but that case concerned the applicability and scope of, and not the eligibility for, pediatric exclusivity under FDC Act § 505A.)
By way of background, FDC Act § 505A provides an additional six months of patent and non-patent exclusivity to pharmaceutical manufacturers that conduct acceptable pediatric studies of new and currently-marketed drug products identified by FDA in a Written Request (“WR”) for which pediatric information would be beneficial. Pediatric exclusivity extends all other types of Orange Book-listed patent and non-patent marketing exclusivity (e.g., 5-year, 3-year, and 7-year orphan drug exclusivity) an application holder may have under the FDC Act, provided that at the time pediatric exclusivity is granted there is not less than nine months of term remaining.  An important aspect of pediatric exclusivity is that it provides additional marketing exclusivity not just for the pediatric indications or formulations, but for all protected indications and formulations of that sponsor’s drug.  Thus, pediatric exclusivity attaches to the patent and non-patent marketing exclusivity for any of the sponsor’s approved drug products (including certain combination products) that contain the active moiety for which pediatric exclusivity was granted, and not to a specific drug product.
Amgen’s lawsuit centers around FDA’s March 22, 2017 Letter Decision denying the company pediatric exclusivity for SENSIPAR (cinacalcet) Tablets (NDA 021688).  FDA approved SENSIPAR on March 8, 2004 for the treatment of secondary hyperparathyroidism in patients with Chronic Kidney Disease on dialysis, and for the  treatment of hypercalcemia in patients with parathyroid carcinoma.
In May 2010, FDA issued Amgen a WR – a condition precedent to obtaining pediatric exclusivity – “to obtain the information needed to understand (and describe in labeling) the safety and effectiveness of the long term use of cinacalcet in children 28 days to < 18 years of age,” says FDA in the Agency’s Letter Decision. “The main objective of WR was to establish the benefits of  cinacalcet use for the chronic treatment of hyperparathyroidism (HPT) secondary to end-stage  renal disease in pediatric patients receiving either hemodialysis or peritoneal dialysis, and to adequately characterize the risks associated with this intended use in pediatric patients,” according to the Agency.  The WR was amended several times over the years, and, as finally amended, requested that Amgen conduct four pediatric studies.  Amgen conducted the studies – and an additional five studies – and submitted them to FDA last November.  But the company also had some difficulty with one of the studies.  “FDA’s [WR] asked that Study 3 involve a minimum of 15 patients who would be treated for either 26 weeks or, if a patient received a kidney transplant during the study, 12 weeks prior to transplant,” but Amgen was able to enroll only 11 patients for at least 12 weeks, and only four patients met all study completion criteria.  Amgen’s two-count Complaint alleges that FDA violated the Administrative Procedure Act (“APA”) in multiple ways, and that FDA’s interpretation of FDC Act § 505A (and the Agency’s failure to provide fair notice about its interpretation) violates the procedural due process guarantees of the Fifth Amendment to the United States Constitution. . . as well as the APA: FDA’s decision violated the [APA] in as many ways as that Act can be violated. First, the agency acted contrary to the plain terms of its governing statute by faulting Amgen for its failure to fulfill “one criterion” of several study requests, when the statute requires merely that the studies “fairly respond” to the Agency’s [WR]. Second, the agency also violated the statute by conflating the standard for accepting study reports with the different, separate, and more rigorous statutory standard for assessing a drug’s safety. Third, by denying pediatric exclusivity, FDA deviated from its treatment of similarly situated sponsors and broke with the agency’s longstanding practice, without explanation. Fourth, FDA’s denial of pediatric exclusivity lacks any logical basis, because it is premised on Amgen’s failure to achieve an impossible goal set by the agency – one that the agency itself cemented by refusing to accommodate amendments to the relevant study.  And fifth, FDA violated Amgen’s due process rights by changing the agency’s interpretation of the statute without providing Amgen advance notice of its newfound interpretation.  To support its case, Amgen points to the Merck decision linked to above.  “In addition to text, context, and purpose, Amgen has precedent on its side,” says the company.  In that case, which concerned MEVACOR (lovastatin), FDA denied pediatric exclusivity because Merck met only 14% of the study enrollment requirement.  But the DC District Court concluded that Merck’s studies “fairly responded” to the WR, and that FDA impermissibly denied pediatric exclusivity for “failure to meet a single term of the [WR].”  Amgen is seeking emergency relief, and a Temporary Restraining Order or Preliminary Injunction by June 6, 2017. Why that date?  Because June 8, 2017 is the date that is nine months before the March 8, 2018 expiration of U.S. Patent No. 6,011,068 listed in the Orange Book for SENSIPAR.  As noted above, the BPCA provides that pediatric exclusivity extends all other types of Orange Book-listed patent and non-patent marketing exclusivity, provided that at the time pediatric exclusivity is granted there is not less than nine months of term remaining.