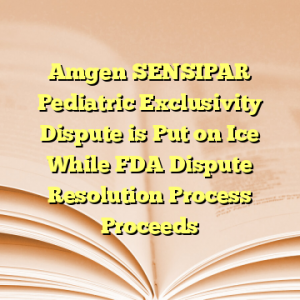 By Kurt R. Karst –
Amgen Inc.’s (“Amgen”) nearly two-week-old lawsuit filed against FDA in the U.S. District Court for the District of Columbia challenging the Agency’s denial of a period of 6-month pediatric exclusivity under the Best Pharmaceuticals for Children Act (“BPCA”) (FDC Act § 505A) applicable to SENSIPAR (cinacalcet) Tablets (NDA 021688) is on hold while Amgen seeks resolution of its claim that the company met the requirement for granting exclusivity by using FDA’s Formal Dispute Resolution process.
As we previously reported, Amgen alleges in the company’s Complaint and Motion for Temporary Restraining Order and/or Preliminary Injunction that FDA violated the Administrative Procedure Act when the Agency, among other things, “acted contrary to the plain terms of its governing statute by faulting Amgen for its failure to fulfill ‘one criterion’ of several study requests, when the statute requires merely that the studies ‘fairly respond’ to the Agency’s [Written Request for pediatric studies].”  Amgen’s lawsuit set off a flurry of activity from each party to the litigation, including a Motion to Dismiss from FDA and supplemental briefs (here and here).  A Motion Hearing was held last Friday where Judge Randolph D. Moss took the matter under advisement.
But on Monday, June 5, 2017, the case was put on hold with a Stipulation and Order signed by Judge Moss. According to the Order, “FDA will accept resubmission of Amgen’s May 25, 2017 request for dispute resolution on June 5, so long as that request is substantially similar to Amgen’s May 25, 2017 request,” and the Agency must respond with a decision by June 26, 2017. “[S]hould reconsideration uphold the May 22, 2017, decision [denying pediatric exclusivity], Amgen shall respond to the reconsideration decision by July 3, 2017; and FDA shall issue a decision on dispute resolution by August 2, 2017,” says the Order.  If FDA, after reconsideration, deems that the studies met the terms of the Written Request for pediatric studies, then “FDA will update the Orange Book to reflect pediatric exclusivity on the first business day following the acceptance.”  If FDA once again denies Amgen pediatric exclusivity, then we’ll probably see the parties back in court.
Regardless of whether FDA decides to grant pediatric exclusivity, or if the exclusivity is ordered granted by a court, the Order states that “any future decision requiring FDA to accept Amgen’s study reports for Sensipar (cinacalcet) under 21 U.S.C. § 355a(d)(3) . . . shall be deemed to relate back, nunc pro tunc, to May 22, 2017, the date of FDA’s initial determination.”  As we previously explained, a “relate back” decision is important here, because pediatric exclusivity extends all other types of Orange Book-listed patent and non-patent marketing exclusivity an application holder may have under the FDC Act, provided that at the time pediatric exclusivity is granted there is not less than nine months of term remaining.  Here, U.S. Patent No. 6,011,068 listed in the Orange Book for SENSIPAR expires on March 8, 2018.  Nine months prior to that date is June 8, 2017.