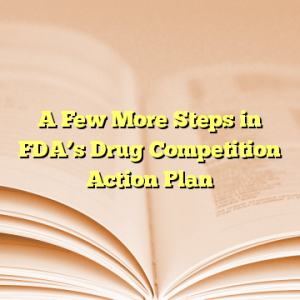 By Sara W. Koblitz –
As a prelude to FDA’s Hatch-Waxman Act public meeting next month, FDA announced today an updated a Manual of Policy and Procedures (MAPP) for review of generic drug applications and a public list of off-patent and off-exclusivity NDA products without ANDA competition.
Effective June 27, 2017, MAPP 5240.3 Rev. 3, Review Order of Original ANDAs, Amendments, and Supplements, updates FDA’s system of priority for review of generic drug applications at all stages of review.  While FDA’s ranking system of types of submissions that will have review priority for OGD has not changed, the MAPP adds as a top review priority generic products for which there are no blocking patents (carved-out patents are not considered blocking) or exclusivities and fewer than three approved ANDAs for the RLDs.  This is a change from the previous MAPP, which only prioritized the review of “first generic products” for which there are no blocking patents or exclusivities for the RLD.  According to FDA’s press release, the policy revision is “based on data that indicate that consumers see significant price reductions when there are multiple FDA-approved generics available.”
To encourage more competition, FDA also published today a List of Off-Patent, Off-Exclusivity Drugs without an Approved Generic.  This list basically serves as a “hit list” for generic manufacturers.  FDA announced in its press release that, in accordance with the revised MAPP, it intends to expedite review of any generic drug application on this list.  Part I of the list identifies products for which FDA could immediately accept an ANDA without prior discussion with FDA, while Part II identifies drug products that may raise legal, regulatory, or scientific issues that should be addressed with FDA prior to ANDA submission (these could be drugs for which a 505(b)(2) is more appropriate or drugs with complex bioequivalence profiles).  Products are identified based on the Orange Book-listed active ingredient, and the list does not differentiate between strength or dosage forms of the same active ingredient.
The list was compiled based on Orange Book Data files accessed May 30, 2017 and will be updated approximately every six months.  NDAs approved in the last year were omitted.
Both of these efforts combined are part of Commissioner Gottlieb’s Drug Competition Action Plan, designed to address competition and pricing in the generic drug market.  It’s clear that this endeavor is a priority for Commissioner Gottlieb, so we expect more on this initiative soon.