A Call to Duty: DEA Practitioner Registrants Beware—DEA Wants You! 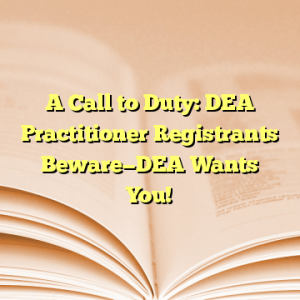 By John A. Gilbert, Jr. & Andrew J. Hull –
Individual practitioners represent more than ninety percent of the approximately 1.6 million DEA registrants. We believe it fair to say that of all the types of DEA registrants (e.g., manufacturers, distributors, importers, etc.), individual practitioners have less opportunity to read the Federal Register for notices related to new duties and responsibilities.  Yet the DEA continually buries new duties and responsibilities related to prescribers in its administrative decisions rather than utilizing other methods such as guidance documents and notice-and-comment rulemaking to inform practitioners of the expanding duties.  Worse yet, as reflected in the recent case of Peter F. Kelly, D.P.M., 82 Fed. Reg. 28676 (June 23, 2017), DEA has created a litany of new duties on questionable statutory or regulatory basis. We also question whether the punishment fits the alleged misconduct of the registrant in this case.
In Kelly, DEA alleged, inter alia, that one of the physician’s employees had misused the physician’s state registration by creating fraudulent prescriptions for state-controlled substances and then diverting those controlled substances into “illegitimate channels.”  Despite evidence that the physician cooperated with state officials when this activity was discovered and took steps to ensure it did not happened again, DEA appears to believe that physicians also need to become private investigators to fulfill their role as DEA registered physicians.  In the opinion, the DEA Acting Administrator addressed these allegations by identifying the following set of duties that apply:

Id. at 28686.
Moreover, the Administrator basically implied that there is also a duty to terminate employees found to have engaged in wrong doing, and threatened “serious consequences” for failing to take such action. Id. at 28691.
In support of establishing these new duties, the Administrator referenced the relatively obscure case of Rose Mary Jacinta Lewis, M.D., 72 Fed. Reg. 4035 (Jan. 29, 2007). That case involved a physician taken advantage of by a non-profit that allegedly supplied medical supplies for AIDS patients in Nigeria.  DEA alleged that individuals at the non-profit used the physician’s DEA registration to order mass quantities of controlled substances and diverted them into non-lawful channels.  Though the physician had some limited knowledge that her registration was being used unlawfully, DEA found that she “fail[ed] to take even the most rudimentary steps to investigate the misuse of her registration.” Id. at 4042.
The Administrator in that case held that the physician had a “duty” to perform an investigation:

Consistent with a registrant’s obligation to “provide effective controls and procedures to guard against theft and diversion of controlled substances,” 21 C.F.R. 1301.71(a), every registrant has a duty to conduct a reasonable investigation upon receiving credible information to suspect that a theft or diversion has occurred.

Id.
In the present Kelly decision, the Administrator again reiterated the alleged “duty” in Jacinta Lewis, and based the new obligations on this “duty.” Kelly, 82 Fed. Reg. at 28685-86.  Yet as outlined above, the breadth and scope of these new duties goes far beyond any reasonable interpretation of the existing law or regulations.
In Jacinta Lewis, DEA cited the first portion of 21 C.F.R. § 1301.71(a), which states that all registrants “shall provide effective controls and procedures to guard against theft and diversion of controlled substances.”  However, it neglected to cite the next sentence:

In order to determine whether a registrant has provided effective controls against diversion, the Administrator shall use the security requirements set forth in [21 C.F.R. §§ 1301.72-1301.76] as standards for the physical security controls and operating procedures necessary to prevent diversion.

21 C.F.R. § 1301.71(a) (emphasis added). Sections 1301.75 and 1301.76 apply to practitioners and list out the duties placed on practitioners to ensure effective controls against diversion.  These duties include storage of controlled substances, employee screening, and reporting upon discovery of theft or loss of controlled substances.  These specific regulations contain the universe of duties placed on practitioners to fulfill their obligation under 21 C.F.R. § 1301.71(a) to “provide effective controls and procedures to guard against theft and diversion of controlled substances.”
The duty the Administrator raised in Jacinta Lewis, and now the expanded duties  in Kelly, do not reasonably flow from DEA’s regulations.  In fact, they effectively amend the existing finite list of obligations placed on practitioners in the regulations.  In our opinion, DEA is shirking its responsibilities as a federal agency to engage in proper rulemaking by creating new investigatory obligations for practitioners.  It also appears to be another example where DEA believes registrants are required, if not qualified, to be expert investigators capable of rooting out diversion schemes.
To DEA’s credit, it did not enforce the new obligations announced in Kelly on the practitioner in that case (note, though, that the practitioner in Jacinta Lewis was not so fortunate).  The Administrator held that

as this is a new and additional duty beyond that which was announced in Jacinta Lewis, which applies only to a practitioner’s receipt of information that his DEA registration is being misused, I conclude that it cannot be retroactively imposed on Respondent.

Kelly, 82 Fed. Reg. at 28686.
Finally, the Administrator imposed a one-year suspension on the prescriber. This punishment does not seem warranted particularly where there is no allegation that the physician was not otherwise inappropriately prescribing and dispensing controlled substances.  In our opinion, a suspension or probation would be more appropriate in cases where a practitioner is required to complete some type of treatment program.  In this case, while the registrant certainly needed to maintain better records and security, remedial training would be helpful if it does not warrant a one-year suspension from being able to practice medicine with controlled substances.*
Our advice, in short, is that DEA registered practitioners consider boning up on their investigative skills, or at minimum, binge watch episodes of NCIS.
*We note that the Administrator ordered that if the physician intended to “dispense” controlled substances after the suspension, the physician would need to show evidence of having completed a “prescribing” course.   We suspect this was in error and that the Administrator meant that the physician would have to complete a controlled substance dispensing course.