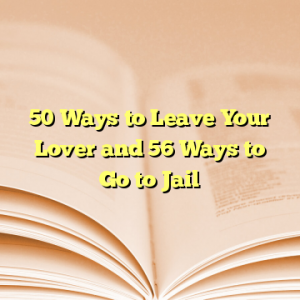 By Robert A. Dormer –
Paul Simon sang about the 50 ways to leave your lover but there are more ways to go to jail if you are regulated by FDA. Congress has increased the regulatory powers of FDA significantly in the past 20 years but largely unnoticed has been the dramatic increase in criminal offenses under the Federal Food, Drug, and Cosmetic Act (FDC Act).  The relevant statutory provision is section 301 of the FDC Act which contains a list of prohibited acts, each of which is a potential criminal violation.  There are currently 56 subsections under 301, many of which contain multiple ways to violate the law.
As many well know the FDC Act is a strict liability criminal statute with respect to misdemeanor violations. That means that intent to violate the law is not required.  Subsection 301(a) is the quintessential criminal offense.  It makes illegal the “introduction or delivery for introduction into interstate commerce” of a food, drug, device, tobacco product, or cosmetic that is adulterated or misbranded.  That prohibition is bolstered by subsection (b) which makes it a crime to adulterate or misbrand any of these products while they are in interstate commerce, subsection (c) which makes it illegal to receive in interstate commerce adulterated or misbranded products and subsection (k) which makes it a crime to adulterate or misbrand a product after shipment in interstate commence.  These provisions have been at the core of FDA civil and criminal enforcement actions over the years.
When this law firm was started in March 1980 section 301 had 18 subsections — (a) through (r). In September 1980 Congress added subsection (s) which criminalized the failure to comply with requirements for infant formulas.  It was not until 17 years later that Congress completed the first alphabet by enacting subsections (x), (y) and (z) as part of the FDA Modernization Act.  Congress has been on a roll since, adding an entire second alphabet of criminal offenses — subsections (aa) through (zz) — in 11 years from 2000 to 2011.  Congress is now in the third alphabet.  The most recent addition is (ddd) which makes it illegal to manufacture or introduce or deliver for introduction into interstate commerce “a rinse-off cosmetic that contains intentionally added plastic microbeads.”  Who knew this was a problem worthy of Congressional action?  The legislative history shows that this prohibition is an environmental measure to address the presence of microbeads in the Great Lakes.
Many of these new criminal penalties were enacted as part of broader legislation that expanded FDA regulatory authority into new areas such as tobacco or enhanced the Agency’s powers, and correspondingly industry’s obligations, in areas that FDA has long regulated, such as food.
Among other prohibited acts is the “charitable contribution of tobacco products,” something that would have been welcomed by the troops serving in World War II, Korea, Vietnam and maybe even today in Iraq and Afghanistan. Another recent example is subsection (jj) which makes it illegal to fail to submit information on clinical trials to Clinicaltrials.gov.  Congress also significantly expanded the potential criminal liability of those in the food business.  Subsections (uu) through (zz) make criminal the failure to comply with very detailed and complicated requirements relating to food safety.  For example, the owner, operator or agent in charge of a facility is required to identify potential food safety hazards, institute preventive measures, monitor the effectiveness of those preventive measures and verify compliance, among other things.  A failure to do any of those things correctly is a criminal violation irrespective of intent.
As the Supreme Court said in 1943 in US v. Dotterweich, 320 U.S. 277 (1943) “Hardship there doubtless may be under a statute which thus penalizes the transaction though consciousness of wrongdoing be totally wanting.”  The potential for such hardship has increased dramatically since 1943 as Congress has expanded the scope of FDA’s authority and criminalized the inadvertent failure to comply with these wide-ranging regulatory requirements.  Although FDA and the Department of Justice have yet to bring prosecutions under most of these newer prohibitions, that should provide little comfort to those who work in FDA-regulated industries.